It is common practice to corpse refrigeration in funeral parlours and, in some cases, a mandatory practice for the temporary preservation of the corpse after death and until burial or cremation. With the entry into force of the new autonomous community regulations on sanitation for cemeteries and funeral parlours, such facilities must progressively adapt their installations to incorporate these systems in corpse preparation and mortuary rooms, as well as in the preservation chambers.

This article analyses the corpse refrigeration installations and the different construction solutions, in compliance with the applicable regulations.

Mortuary rooms at temperatures from 0 to 4ºC are treated as positive temperature refrigeration chambers. As such, they must be thermally isolated to limit the consumption of energy and special attention must be paid to waterproof the enclosures correctly and prevent the formation of condensation on these surfaces and in the ventilation system.

Whenever possible, it is highly recommended to build mortuary rooms with insulating panels for refrigeration chambers. The insulating panel is usually manufactured in self-supporting modules of the sandwich type, composed of a double-injected steel panel with polyurethane foam thermal insulation, and with a thickness between 60 and 80 mm, to limit the heat gains to 8W per m². In this case, the steel panel acts as a steam barrier to prevent water from condensing on the chamber’s walls.

In the cases in which the chamber needs to be built from scratch, we recommend including thermal insulation panels on walls and ceilings, which can feature a plasterboard backfill; however, the use of insulation on partitions between mortuary rooms should be avoided. To achieve this, we recommend using vapour-tight insulation panels, or inserting a vapour barrier, at least on the hot side, to prevent the formation of condensation inside enclosures, which could lead to damp spots on walls and floors.

In the case of mortuary rooms, these will have a large-dimension and fixed panoramic window, which must be built and treated accordingly. Ideally, double glazing systems with air chamber (of the Climalit type) should be used, with triple glazing in some cases. Otherwise, the glass surfaces would fog up on the external face. 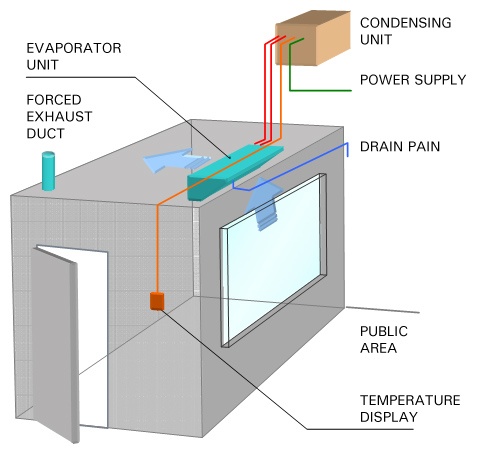 The mortuary room can be equipped with a refrigeration unit of the split type, as shown in the figure below, placing the temperature sight glass outside the room.

The preparation and mortuary rooms are work rooms and, as such, must be refrigerated according to the conditions of the work environment, i.e., from 15 to 18ºC. Special thermal insulation elements should be installed on the chamber’s enclosures for this temperature range, although it is not necessary.

In some cases, it might be practical to build these rooms using the same refrigeration panel as that used in refrigeration chambers, obtaining the suitable execution results. In any case, the walls and floors of the chamber must be finished in washable coating elements. 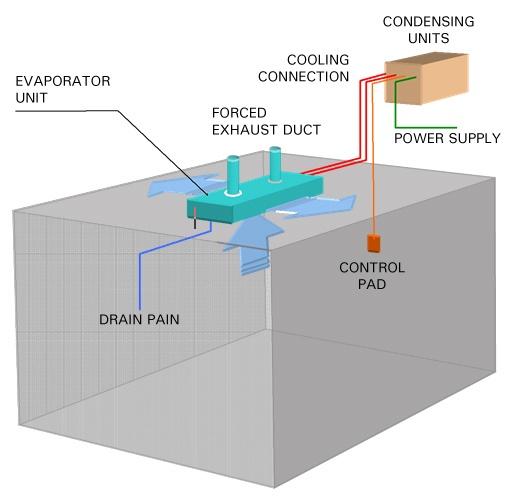 The condenser unit built into these units can be installed in the following arrangements: horizontal, centrifugal or silent. It is of vital importance to ensure proper ventilation of the room by renewing the air inside at the corresponding intervals. The suggested air volume renewal rate is 5 to 6 renewal renewals every hour. This requires a high airflow rate, so a forced ventilation system must be installed, ideally with intermittent operation as an energy saving measure.

The mortuary rooms in cemeteries and funeral parlours operating in cities with more than 5,000 inhabitants are required to have a refrigeration chamber installed to preserve corpses at a temperature from -2 to 4ºC.

Currently, we can find one or two-body chambers in the market, which have been specially designed for such purposes, and in which a compact ceiling-mounted refrigeration unit can be installed.

However, in the case of large rooms and according to the local regulations, it might be advisable to equip these rooms with a large refrigeration chamber, preferably built with modular isothermal panels, with an insulation thickness of at least 80 mm.

Funeral parlours usually have a technical room or chamber in which the condensing units of the refrigeration units and other machines are installed.

These rooms are used at different intervals and not used for some periods, so it is recommended to install independent condenser units for each evaporator. This combination of evaporator – condenser unit is manufactured in series as a semi-compact and high-reliability assembly, offered in a wide range of power ratings and construction types.

If various condensing units are installed for the different rooms and refrigeration chambers, it is highly recommended to install units of the centrifugal type. hich will allow discharged hot air to be driven through conduits to grilles on the facade, preventing the temperature inside the room from building up. The preservation of dairy products

The daily consumption of certain products with a high vitamin content makes the correct preservation of dairy products essential for... read more

With the entry into force of the EU's F-Gas Regulation 517/2014, we need to find natural replacement refrigerants that allow... read more 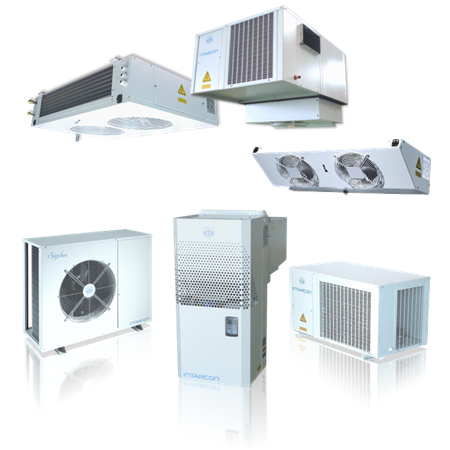 R134a in the new refrigeration units by Intarcon

The great innovation in 2014 INTARCON catalogues are the new models with R134A refrigerant for positive temperature in all commercial... read more We use cookies on our website to provide you with the most relevant experience by remembering your preferences and repeat visits. By clicking "Accept all", you agree to the use of ALL cookies. However, you can visit "Cookie Settings" to provide controlled consent.
Cookie SettingsAccept All