The objective of the ECO2MARKET project is the development of supermarket refrigeration installations with low environmental impact, by using natural refrigerants and the practise of eliminating the risk of leaks of refrigerants with Global Warming Potential. The project is promoted by AFAR (Association of Andalusian Refrigeration Manufacturers), and looks to unite technical capabilities of different manufacturers to develop and propose to the market a new model of refrigeration installation applied to supermarkets.

Recent legal and financial changes have disrupted the refrigeration sector in Spain. On the one hand the enforcement in 2014 of a new tax on fluorinated gases with greenhouse effect, taxes in an influential way the 6 million tonnes of CO2 equivalents emitted into the atmosphere by refrigeration installations in Spain.

On the other hand, the passing in the European Parliament of the F-Gas directive (Regulations (EU) Number 517/2014), that establishes a new schedule for the prohibition of HFCs, seriously compromises the feasibility in medium term of current refrigeration solutions.

One of the sectors especially affected is food distribution. In effect, direct expansion refrigeration installations in supermarkets are characterised by a large greenhouse gas load, and a difficult to avoid leak tax.

ECO2MARKET project has received financial support from CDTI in the call for submission “Regional Cooperation in R and D (Feder-Innterconecta) 2015, of the Ministry of Economy and Competitiveness of the Spanish Government, and co-financed with Structural Funds of the European Union. 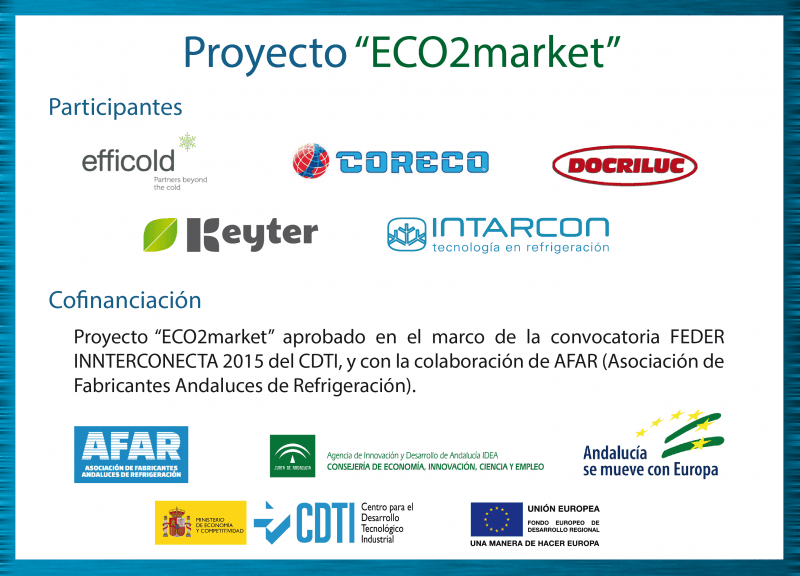