Due to growing concerns about the harmful impact that fluorinated refrigerants can have on the environment, natural refrigerants have made a comeback, especially NH3 and CO2 used for industrial purposes at low temperatures. In this post we will talk about CO2 refrigeration.
Commonly known as R-744 when used as a refrigerant, carbon dioxide (CO2) has become one of the most popular natural refrigerants in recent times, although it should be noted that this technology is not new, as it was already commonly used over a century ago.
The popularity that CO2 has achieved recently as a refrigerant is due to its very low impact on the environment compared to HFCs (hydrofluorocarbons), which are under threat from current regulations (F-gas). CO2 does not damage the ozone layer (Ozone Depletion Potential ODP = 0) and it has a low impact on global warming (Global Warming Potential GWP = 1), taking this last value as a reference for determining the GWP of other gases. Also, the high efficiency of this gas means it has a lower indirect contribution to the global warming of the planet.

CO2 is an odourless, colourless liquid that is heavier than air. Although it is necessary for life on earth, it is also a Greenhouse Gas (GHG) that can modify the environment if its concentration in the atmosphere increases significantly. It is a “high-safety” refrigerant, i.e. “non-flammable” and with a “low toxicity”.

CO2 was used as an early refrigerant before freons, but it quickly fell out of use due to its more complex technology. It has excellent thermo-physical properties, although it poses difficulties due to its low critical temperature value (30.978°C) and its high pressures. It has a volumetric capacity that is much higher than that of conventional refrigerants.

What is the history of CO2 as a refrigerant?

CO2 has been known since the beginning of mankind, existing in the atmosphere at a concentration of 0.04% by volume.

As a refrigerant, it began to be used in the 19th century with mechanical refrigeration. In 1881, Carl Linde built the first machine using CO2. Later, compressors were developed to work with CO2 and double-stage systems. Its use became increasingly widespread.

Why are we considering using CO2 in refrigeration systems?

If you look at refrigerants with GWP levels < 150, the majority are flammable (HFO), toxic (NH3) or work at high pressures (CO2).

The main difference of CO2 compared to other refrigerants is the operating pressure at which it works. However, this makes it a high-density gas, resulting in a greater cooling effect with a low circulating mass.

The most common applications, the advantages, disadvantages and the regulations for CO2 as a refrigerant

The most common applications of CO2 refrigeration:

The advantages of using CO2 as a refrigerant:

Disadvantages of using CO2 as a refrigerant: 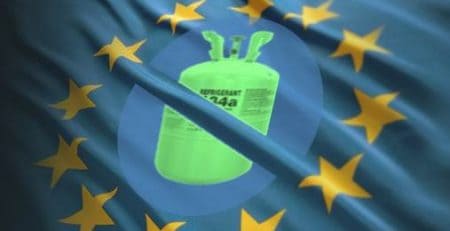 F-gas or the prohibition of fluorinated gases

Six years ago, the European Parliament approved Regulation (EU) No. 517/2014, known as the F-gas Regulation on the prohibition... read more

From first January 2014, a new tax regulation on fluorinated gas is into force in Spain, which taxes the... read more